Keating Partners has developed hundreds of projects in many market sectors. Services we provide:

Since 1776, Philadelphia’s “center” has been moving west. Most recently, this center is taking form along the 30th Street corridor in West Philadelphia, a hub of commerce, technology and innovation in the 21st century. Keating helped define this vision (beginning with the Urban Ballpark at 30th street), vested large institutions in the outcome, helped raised capital for the initial $300 million investment, while addressing historic, site security and environmental issues.

Working using preliminary project program information, Keating prepared a test yield of various programs for a new stadium that allowed all parties to better understand the planning and development issues that will likely shape construction of a new 30,000 seat stadium on a compact urban site. Some of the potential ancillary facilities shown on this yield plan are new academic facilities, indoor practice facility, intramural sports facilities, a hotel, retail and a 1,500-car garage. 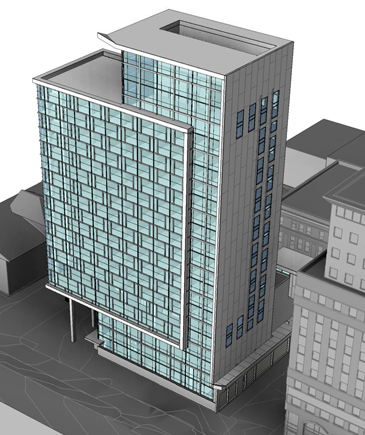 Conversion of a 560,000 square foot single-tenant office building to a mixed-use development that includes 267 residential units, 60,000 square feet of retail and office space and 150 parking spaces; the building, located above one of the region’s commuter rail hubs, is listed with “landmark” status on the National Register, which led to a comprehensive and meticulous upgrade of the structure, including restoration of the main entry hall and Arch Street entry/elevator lobby, the two-story atrium that joins the entries, the window and door bronze work and virtually all of the other remaining historic building fabric. 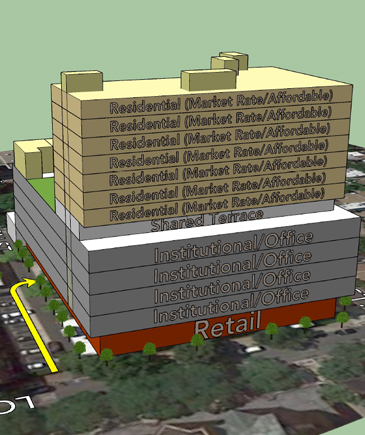 Development of a new hotel on Philadelphia’s Delaware River waterfront, the first major private project to be completed on the City’s Penn’s Landing property; the project includes a 360-room hotel, meeting and ballroom facilities totaling 25,000 square feet, a 200-seat restaurant and other full-service hotel amenities and a 450-space garage that is connected to the hotel.

Assembly and redevelopment of a 1.8 acre parcel at the cultural center of downtown New Brunswick; development and implementation of a plan for a 365,000 square foot hotel, conference center and luxury condominium mixed-use urban redevelopment project. The project includes a 250-room hotel, a 50,000 square foot executive conference center with 500 seat ballroom, 250 seat amphitheater, 20 conference/meeting rooms, a board room and 48 luxury condominiums. Also included are The John H. Heldrich Center for Workforce Development, the nation’s first university-based institute devoted to transforming the complex system of workforce development at the local, state and federal levels, as well as retail space, including two restaurants and retail stores. The project also incorporates a new public plaza, the symbolic cultural center of the City, as well as below-grade parking for the complex.

Worked with the United States Postal Service (USPS) to develop concept and entitlement drawings for redevelopment of this 2.5-acre site located adjacent to the highly acclaimed Bethesda Row Retail development at Bethesda Center. Keating managed the preparation of all plans, reports and analyses that were required by Montgomery County for re-zoning of the property for a mixed-use residential use. The product of this effort was approval by the County to develop 140 units of rental residential and ground-floor retail and parking for the complex. The 250,000 square foot development will feature significant courtyard amenities on the podium level above the retail and direct connection to the Capital Crescent Trail, a well-used bike and pedestrian pathway to Georgetown

Provided comprehensive development and management services, including program development and test-fits for USPS operations, various residential concepts, retail (USPS and commercial) and structured parking suited to the blend of uses; sourced pre-development and permanent financing for redevelopment of the property; and managed the rigorous entitlement and design development process for the approved development concept, a process that involved numerous local and County reviews and presentations.

Initially, to develop a comprehensive plan for redevelopment of a 24-acre United States Postal Service (USPS) property, including planning, market and economic analyses that resulted in a site redevelopment plan encompassing a nearly one million square foot conversion of the Main Post Office to the IRS Regional Headquarters; a 1,650-space parking garage located on the site of the former Postal Service Annex; and a new USPS retail and mail operations and distribution facility within an existing USPS garage. Overall development totaled nearly two million square feet.

Provided a full range of development management services, from conceptual plan development, transaction structuring (with multiple institutions and entities like the University of Pennsylvania, Amtrak, PennDOT and the City of Philadelphia) and project financing through selection and management of a large design and consultant team that addressed program development, tax credit, historic preservation, environmental remediation, LEED certification and security issues.

The team was competitively selected by the State of New Jersey to provide a turnkey delivery of a demonstration school in East Camden; our demonstration proposal combined a new elementary school (Octavius V. Catto) totaling 95,000 square feet with a new 25,000 square foot Boys & Girls Club of East Camden and a ten-acre park; this unique combination couples the typical building program for an elementary school to the many new programs of a Boys & Girls Club to produce a facility offering an extended day of children’s activities that is unmatched by any school of this size.